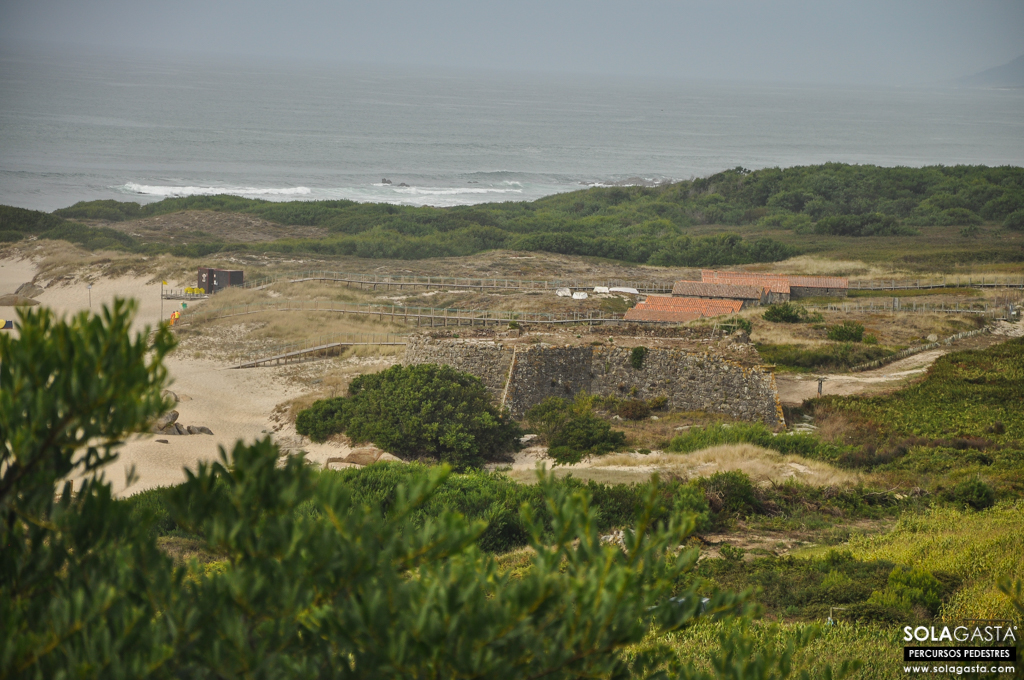 The “PR7 VCT – Paçô Fort Trail” is one of several hiking routes marked in Viana do Castelo county. About 4 kms in length is classified of small route (PR) and develops more properly in Montedor village, Carreço parish.
Reaching the beaches in Carreço, I go to north on the cobbled road that follows the beach. This is increasingly scarce in a stretch of coast where the sea is gaining ground. I reach at the end of the road, local access of Fornelos beach, and where begins the marked route. The information panel of Carreço trails is right there, next to the “Pias Salineiras de Fornelos”. Carved in granite outcrop, it was here that the salt was mined in the Iron Age. The small bead on the rock had the function of retaining the sea water, thereby allowing a fast evaporation.
I start the walk to north in a sandy ground path between rocks and some native vegetation. In the initial section of this marked route, the trail is also common to “PR6 VCT – Pedestrian Path of Montedor Windmills”, but I will describe it here later.
Some birds rest in the granitic rocks along the shore, protect them from rough sea. A few dozen meters from the start I saw the cave paintings of Fornelos, representing deers and horses, possibly dating from the Bronze Age.
I start the ascent by a trail of large slabs, enjoying the shade of the pine forest that surrounds it, to the village of Montedor. Through a stone path flanked by high walls, I come tocave paintings of “Fraga da Bica”. If it wasn’t for the identification plate of the site, these will go unnoticed on a slab placed on the back of a small yard.
Still walking upwards, first by “Travessa da Bica” and then by the Bom Sucesso Street, to the Montedor’s lighthouse, the northernmost of the Portuguese coast. In this street, the old chapel of “Nossa Senhora Senhora do Bom Sucesso”, founded in 1692, is today in an advanced state of degradation.
I arrived to the lighthouse, the highest elevation point of this route. Built on the remains of a settlement from the Iron Age, became operational in 1910, guiding since then the seamen for good directions.
Just to the left I found the “mill of the snack”, in portuguese “Moinho do Petisco”, still active. Being privately owned, you can see it still grind for a few days a year, with their sails to the wind. The landscape of the Atlantic, glimpsed from it’s patio, is simply amazing. I still walk in common trails to the two marked routes down the village until a fork, almost out of the houses, where the two trails diverge. Getting on, following the marks by the pine forest, towards the Paçô Fort.
Passing the pine forest, I saw the Paçô Beach and the fertile fields of corn. It appears on the horizon for the first time, the Paçô Fort which names the trail. It is a small maritime fort from the XVIII century and classified today as a cultural heritage building. It is located in the beach and had the function of defense and surveillance of the left bank of the Minho River and the coastline.

It is a small maritime fort from the XVIII century and classified today as a cultural heritage building.

I walk down the mountain on a track flanked by native vegetation to the sea. In here, I follow the right to visit the fort, later returning to the same spot to follow now a dirt track, with flowering heather in a blanket of yellow and roses, to the initial point of the route.

Where To Stay
4,4 kmscircular
–
ALTIMETRY 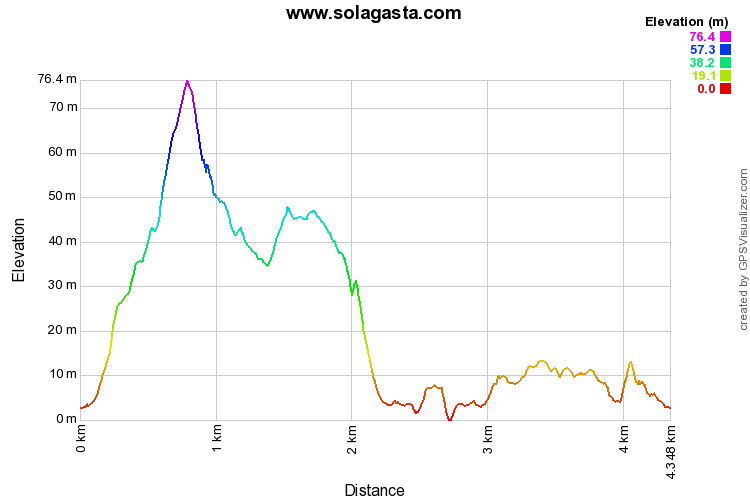 « Hiking Trail in Afife – River, Sea and Hill (Viana do Castelo)
Refinement with one foot in the sand »