“PR1 / FIG – Rota dos Arrozais” begins in the center of Maiorca village, more precisely in “Terreiro do Paço” where the Viscount’s Palace of Maiorca is located, also known as “Paço de Maiorca”. This heritage built from the 19th century was declared a Public Interest Property in 1977 and has one of the largest collections of Dutch tiles in the world. Unfortunately, I can’t visit it because it was closed on a Tuesday in July, although the Maiorca Parish website inform us that it’s open daily. A small detail to correct.
I started the hike to south, going up at this early stage to the greater altimetry point (about 90m) of the marked route. From here I have a spectacular view of the rice fields. In the middle of the rice growth phase, it paints of an intense green the fields of “Baixo Mondego”.
On a rural path with some gravel I go down to the fields. Further on I find Oliveira Fountain where I turn left to the trail with the rice fields on both sides. I pass a small tunnel under A14, the highway that connects Coimbra to Figueira da Foz, and on the other side I discover the original “Ponte das Cinco Portas” (Five doors bridge) (photo above).

In the middle of the rice growth phase, it paints of an intense green the fields of “Baixo Mondego”.

Here I lost track signaling due to the work of “Baixo Mondego” hydro-agriculture intervention. This led me to follow a parallel path to what was actually part of the marked route to reach the road between Santa Olaia Hill and the Parish of Ereira. Some storks, curious as I passed, flew over the rice paddies where food is plentiful. On the small asphalt road that runs to the north-west, I see at the distance to the left the village of Maiorca, while on the right, adorned at the top of the hill, the castle of Montemor-o-Velho, probability the oldest castle in Portugal.
I arrive at the Santa Olaia and Ferrestelo Hills, a classified site that proves the great importance of the place, but apparently not important enough to deserve more attention from responsible entities. The information panel by the road is dilapidated and at the top, the Chapel and “Castro de Santa Olaia” weep some discouragement and abandonment. Although we can find some vestiges of Phoenicians, Romans, Medieval and the Neolithic period, today I only notice the lack of information that would support a more enriching visit to this place. I continue to walk now to the less exciting part of the route, the access road to A14 that passes under it and follows in the direction of Maiorca. About 700m further on, I take the right path on a sidewalk road that leads me again to the rice paddies with some streams that feed them. After the bridge I’m already near the village and the landscape changes to a more traditional farming fields as I approach the end of the route. I go through the Lake Park of Maiorca (pictured above) and I am greeted by two ducks resting quietly on the trail. Trying not to bother them I move away and go up to the mill to take some photographs of another perspective of the lake and its surroundings. Already in the final section of the route I discover the Church and finish the 13km hiking trail next to “Paço de Maiorca”. 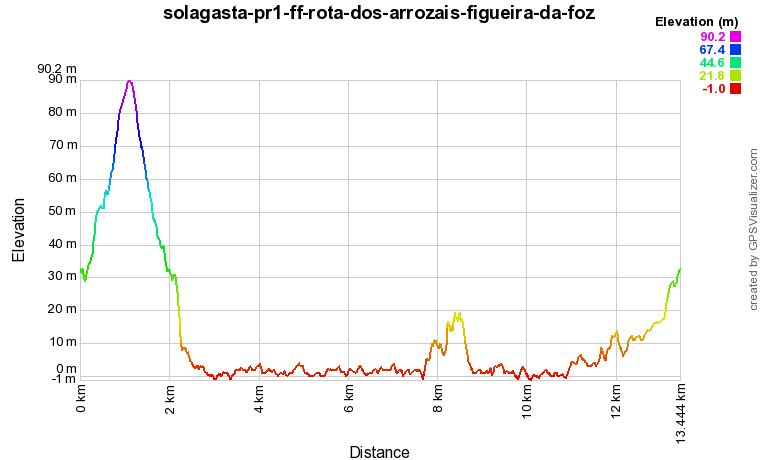