Hiking in Funchal – From Marina to Monte (Funchal) 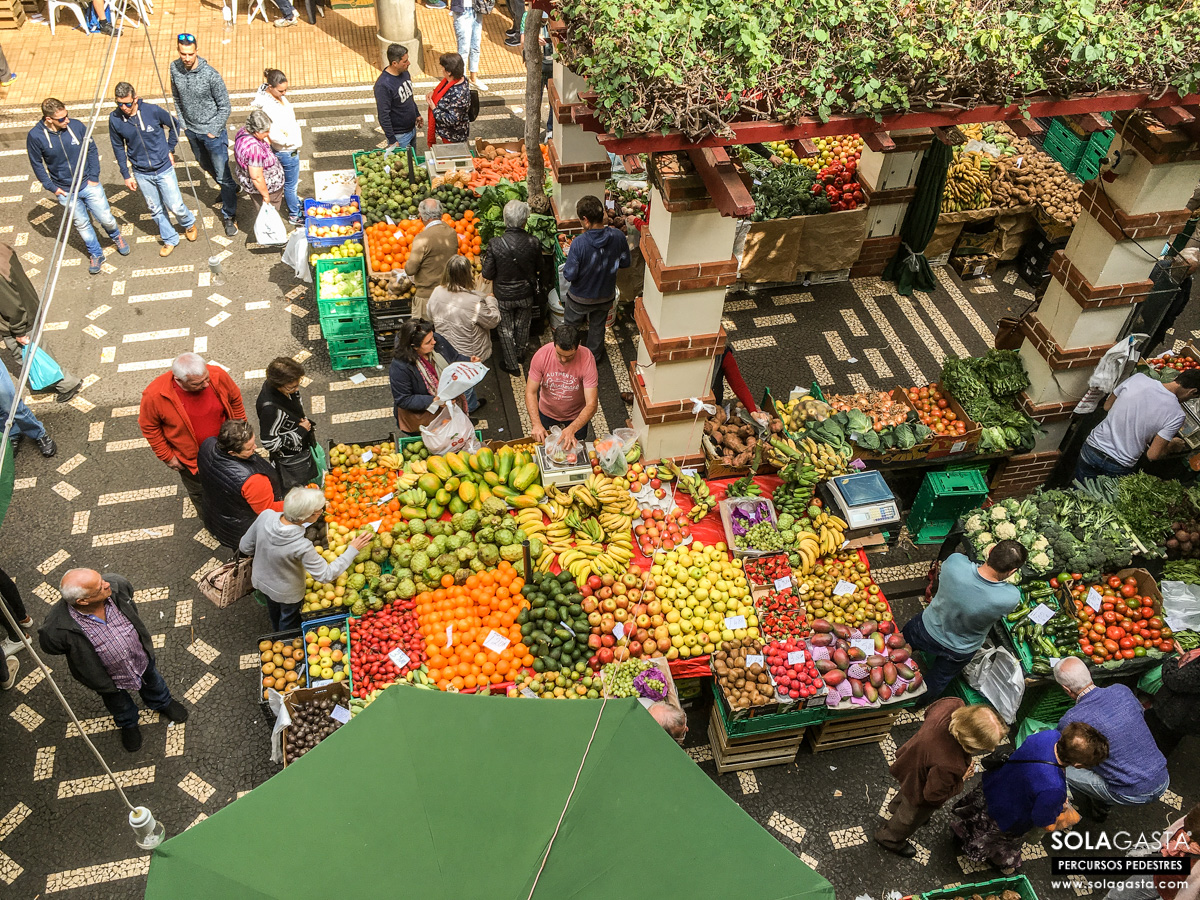 On the second day in Madeira we wanted to take on the role of real tourists and discover the city of Funchal with its major attractions. It was difficult to include everything in a day’s walk, but we tried to at least visit the most iconic places, although in some of them we couldn’t stay long to know them better.
This a route mostly done on foot but truth must be told and the ascent to Monte (Nossa Senhora do Monte) was made in the Cable Car and part of the descent in a basketwork sledge. We must experience some of the island’s most “instagrammables” experiences.

Funchal extends along an amphitheatre with sinuous roads and green terraces where small vegetable gardens and the famous banana trees grows.

Moored at the pier were two “monstrous” cruise ships, the largest with at least eight floors high. It is normal for these bands to find authentic aquatic “cities” moored on the quay because the island is part of the itinerary of many cruise routes, but its magnificence always impresses me.
Next to Hotel Pestana, CR7 Museum received its first visitors and the statue of Cristiano Ronaldo at the entrance gave them a welcome reception as they ran over to the usual “selfies”.
We walked on the promenade, on Avenida do Mar e das Comunidades Madeirenses (Sea and the Madeiran Communities Avenue), where it’s difficult to find a building without a cafe or a restaurant. We didn’t stop for a “espresso” because we had the route well defined and so much to discover in the Old Town. We went towards the Cathedral and in the Central Square of Arriaga Avenue we contemplated for a moment the dynamics of that artery that also reflected the vivacity of the tourism in the island. We continue to the City Hall Square where beyond the City Hall we can visit the Church of the Jesuit College and discover the Sacred Art Museum. By Bettencourt Bridge we passed over Santa Luzia River and at the end of Dr. Fernão de Ornelas Street we found the beautiful Farmers Market. Opened in 1940, it’s now a tourist attraction in the city. And there are lots of tourists, mostly foreign, with cameras in their hands, tasting the colorful and aromatic fruits. I was also approached by a friendly saleswoman who in English asked me if I wanted to taste a piece of what appeared to be a papaya. She apologised when I kindly deny the offer in Portuguese. I thought that the probability of speaking to a Portuguese would certainly be much lower than the probability of meeting a foreigner. When asked in English she would certainly save some time.
There are rumours that in the Farmers Market the fruits given to taste are often sweeter than those who later are selling to us, but since I have not tasted them nor bought them, I can’t prove or deny this rumour. One thing I guarantee, we didn’t get disappointed and we liked the smells, the colors of the fruits and the flowers, the costumes, the tile panels, the hustle and bustle in the corridors … an explosion of senses.
Next to the Farmers Market we visited the Fish Market where the fresh fish of the day is prepared by wise hands. When I write this text, I am literally mouth-watering as I remember the tuna red slices and swordfish filleted or sliced for grilling. We went up to the terrace and on the wooden benches we were able to enjoy the morning sunshine a little bit while we waited for Marco from Amigos da Natureza (Friends of Nature). We want to meet him because with his willingness to help us in planning the hiking trails (more accessible to families with a small child) he could only be good person.
Out of the market in a small bar we accompanied the coffee with conversations about the island, the paths traveled, the tourism, the future … but the time doesn’t stop and without realizing it was almost lunch hours.
We departed and continued the walk through the Old Zone, walking along Santa Maria Street, one of the most emblematic streets of the city. As part of “ArtE Project of Open Houses ” many of the time-worn doors have now a new life due to local artists who worked on them, painted them and created on them artistic installations. We had lunch close by. There were plenty suggestions to choose from but we didn’t take to much time and opted for some delicious regional snacks. 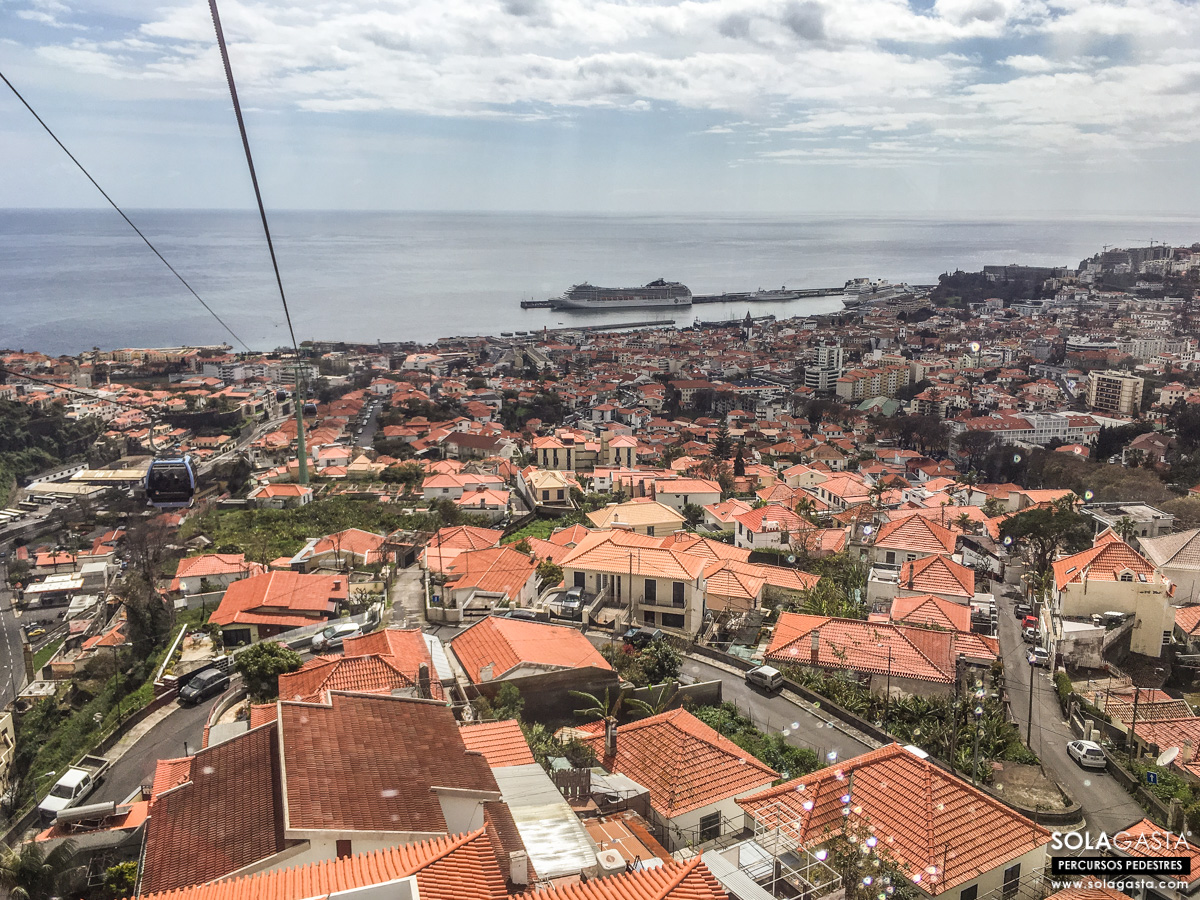 After lunch we walk to Almirante Reis Garden to take the cable car to Monte. Probably you`ll find a large influx of tourists here, so take time to stand in line, either to buy the ticket or to get on the boarding platform.
Our turn came and Maria was beaming with joy.
– “Let’s ride the train!” – she said between uncoordinated jumps.
We started the ascent and the breathtaking scenery make us forget the waiting time in queues. We don’t know where to look and the camera goes into a frenzy of shots, afraid to lose any plan of this 360º screen. Funchal extends along an amphitheatre with sinuous roads and green terraces where small vegetable gardens and the famous banana trees grows.
We arrived at Monte at 550m above sea level. We walked on “Caminho das Babosas” and we passed by Monte Palace Tropical Garden which we unfortunately didn’t visit due to lack of time but also because we found the price of the tickets a bit exaggerated for a family. We continued to the Church of “Nossa Senhora do Monte” and after climbing the stairs, we contemplated the bay in its fullness. We took a deep breath.

In the park below, we walked along “Padre Jose Marques Jardim” path to “Largo da Fonte” (Fountain Square). It’s time to return and we must do it in style with the famous basketwork sledges. With Maria wedged between us two and the backpack at our feet we started the descent in the basketwork sledge handmade produced with wicker and wood. The two sledge drivers expertly maneuvered our vehicle as it gained speed. Dressed in white and with a straw hat, their boots with thick soles are the greatest treasure. They are used as brakes ensuring the safety of thousands of visitors that each year venture in this exciting descent of about 2 km between Monte and Livramento. At the end we didn’t resist to drink a “poncha” to gain energy to what still misses of the descent, now on foot, to Funchal marina.
By “Caminho do Monte” and “Santa Luzia” street, and with the help of the Cathedral Tower that guided us on distance, we quickly arrived at Arriaga Avenue. A noble area with beautiful buildings of which I highlight “Banco de Portugal” and “Baltazar Dias” Municipal Theater.
In the Municipal Garden we embrace the colors that give the nickname to this “Flowers Island” and while a cruise ship left the island, we sat at the sunset next to the Park of Santa Catarina Chapel, with a privileged view to the Funchal bay.
This day full of emotions came to an end. Tomorrow we would go to Santana and São Vicente for some new adventures. 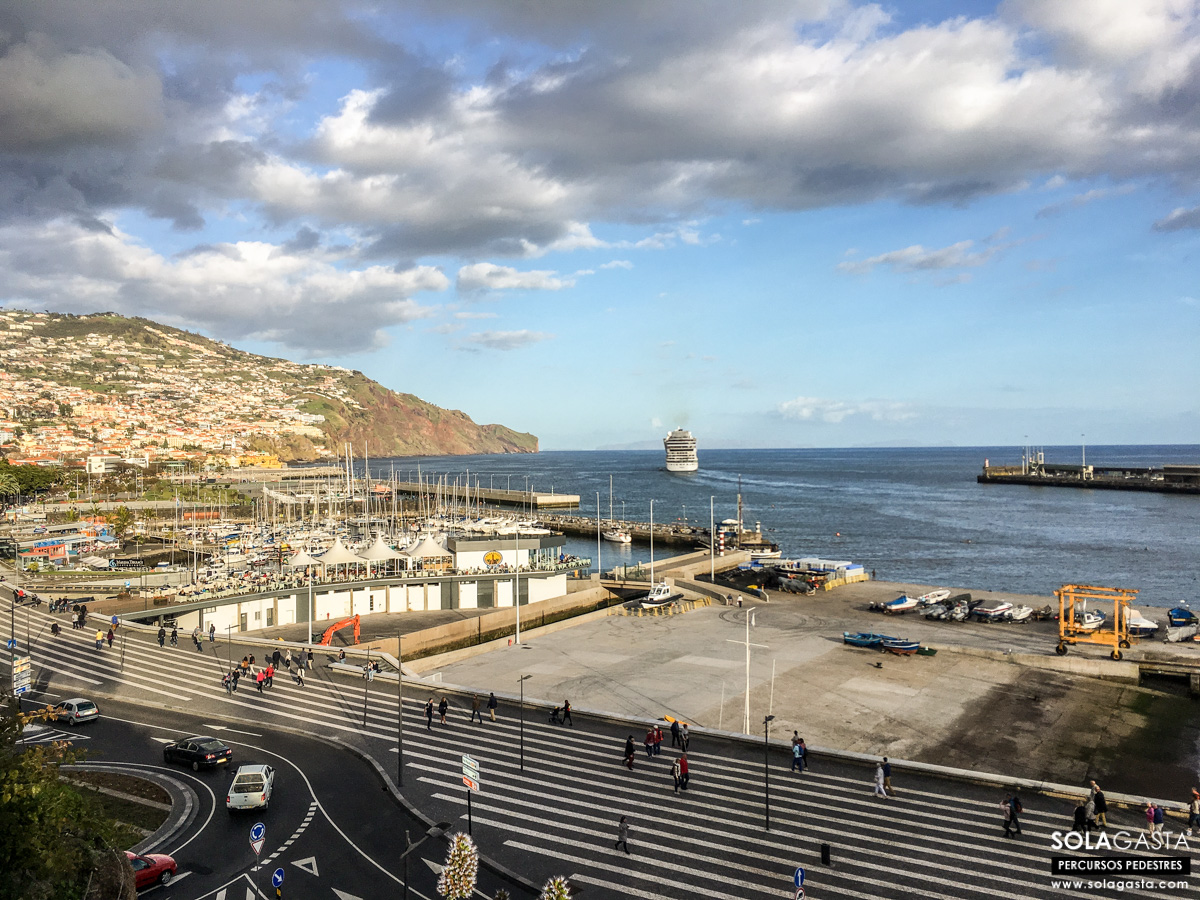 – To visit Funchal, park your car in the parking lot of Plaza CR7, next to the Marina. It’s an underground park whose entrance is by “Francisco Sá Carneiro” Avenue, near the Museum and Hotel Pestana CR7. It’s cheaper than the majority and it avoids the traffic of the city center.
– Visit the Farmers Market but be careful about some inflated prices and try to buy genuine products from the region’s farmers who actually grow them.
– Take the cable car ride but buy the ticket in advance. Probably you’ll find a large influx of tourists and the consequent waiting lines. Opt for a place facing the sea, ie with your back to Monte to enjoy the scenery during the ascend.
– Before visiting Madeira, consult the agenda of Amigos da Natureza (Friends of Nature). They usually hike trails off the usual tourist circuit.
– Go down the hill in a “Basketwork Sledges” and drink poncha at the end. If you are tired it’s possible to take a taxi or bus to Funchal downtown. 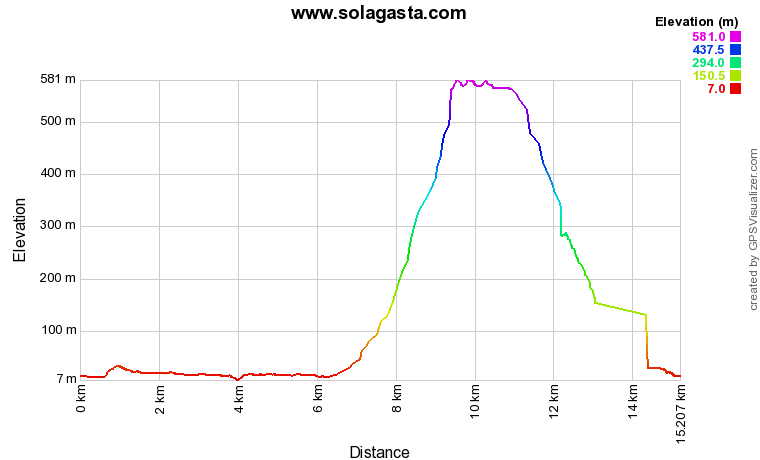